This is a text widget, which allows you to add text or HTML to your sidebar. You can use them to display text, links, images, HTML, or a combination of these. Edit them in the Widget section of the Customizer.

“Have a drink for charity,” I thought to myself. “Alright, if I have to.”

Back in April, I attended the Mahomet Craft Beer Festival. Since I had such a good time in Mahomet, I decided to make the hour drive to Decatur and check out how the former home of the Chicago Bears does their beer festival. It was a warm, sunny, seventy-degree day at the end of September. Perfect for a festival, especially one for charity. All proceeds went to benefit the Decatur Area Arts Council and MRI, (Macon Resources, Inc.), a non-profit organization that provides services to persons with disabilities. “Have a drink for charity,” I thought to myself.  “Alright, if I have to.”

The $25 admission came with eight beer tickets and a souvenir tasting glass. Additional tickets were available for sale. The festival also offered a $10 Designated Driver admission. Door 4 and Jumbo Tenderloin food trucks were on hand to keep everyone fed. Live music, including singer-songwriter Kristen Nelson, played throughout the afternoon. 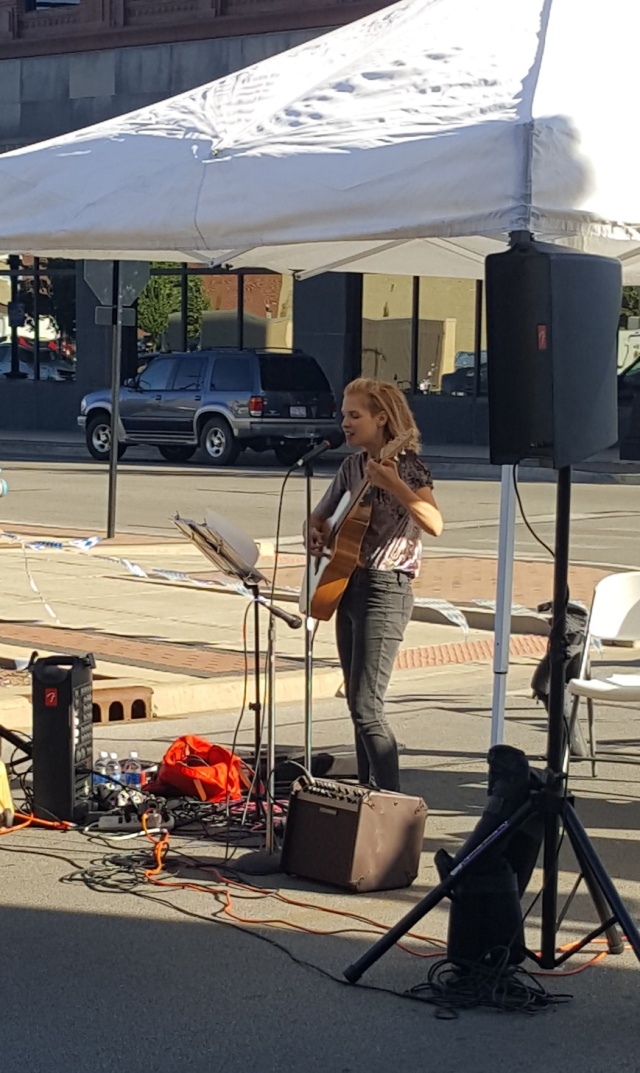 Attendance at the festival had almost doubled from last year, according to one vendor. Growing attendance demonstrates the excitement of people to have another craft beer festival in central Illinois.

There was a wide variety to taste, including over 100 beers and ciders, available at 28 various stations. Stations #1-16 housed beer distributors. My focus was drawn to stations #17-28 that housed local breweries, The brewers were proudly serving their libations and chatting up festival goers.

I didn’t expect much had changed in the local scene since the Mahomet Craft Beer Festival but I was wrong. Five new breweries had opened which are each at different stages of becoming distributed in Champaign County. Keep your eye out for them.

Monarch Brewing (Monticello) opened last April. Housed in an old church they have a restaurant that features their brews and full bar, including wine. Monarch brought their Tumble Down Oatmeal Brown, a medium-bodied English-style Brown Ale (ABV: 5.9%, IBU: 32) made with Maris Otter, Carmel Malt, Victory, Brown, Chocolate, Flaked Oats. They also brought Whitt’s Wit, a hazy, citrusy Witbeir spiced with coriander and chamomile. Since it was a warm day, I anticipated that the Witbeir would be the favored beer of the crowd.  However, both beers were poured equally and festivals goers were enjoying themselves.

Iron Spike Brewing Co. (Galesburg) brought their Light Rail Cream Ale (ABV 5%, IBU: 14) a light bodied American Ale made from Pale, Pilsen, and Munich malts and corn. Also available was the Flatback IPA (ABV: 6.5%, IBU: 65) an American IPA made with Chinook, Cascade, and Centennial hops. Their railroad themed brewing company also has a restaurant and full bar (including wine) in an old firehouse in Galesburg, complete with 3 of the original firepoles. When I am in between Peoria and the Quad Cities, I will be stopping in.  Check out the detail of their can designs!

Golden Fox Brewing and Reinstone Brewing (Illiopolis) shared a table, which was fitting since they are located in the same building in Illiopolis. I had to ask where Illiopolis was. It is a small town of 900 between Springfield and Decatur. I was surprised, two breweries in a town of 900. Neither brewery has a taproom but their beers are available at “the bar across the street”, Uncle Monkey’s, as well as at the local wine lounge/ game parlor, Four Queens. For a town of 900, Illiopolis has a lot going on. Additionally, rumor has it that square dancing is popular activity. Golden Fox brought its HellaHefe No Mercy! Hefeweizen (ABV: 5.6%, IBU:13)., Cray Cray APA an American Pale Ale (ABV: 7.5%, IBU: 77), and Rhianna’s Red an Irish Red Ale (ABV: 6.4%, IBU:15). Reinstone Brewing brought Interstellar Storm, an American Wheat (ABV: 4.20%).

Hand of Fate Brewing Company (Petersburg) brought their barrel aged Debauchery Imperial Porter (ABV: 9.5%, IBU: 35) with chocolate, caramel, and coffee aged in bourbon and red wine barrels. Debauchery is definitely the word. They also brought What the Fuzz? A peach and ginger cream ale (ABV: 5.1%, IBU: 17). If you would like to see some absolutely decadent pictures of beer, hops, and brewing check out the Gallery section of their website. I truly enjoyed all of their photos. But before stopping in at their taproom make sure to check the hours, since they vary. Alternatively, you can also head to the Four Queens in the up and coming town of Illiopolis to have a pint on draft.

Last of the newcomers, Limerick Brewing Company (Lincoln), arrived without any beer to pour. The reason? They are that new to the scene. They have a bar in Lincoln that has been open for two years. Now they have decided to join the game. So, if you would like to have a taste, you will have to head to Lincoln. Hours vary, so check before you leave. Food is not served at the bar but they share a patio with the Italian restaurant next door.  Food and beer pass freely between the two establishments. 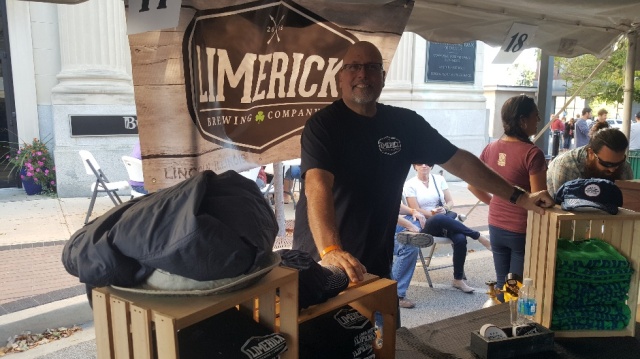 Hometown favorite, Decatur Brew Works, was a presenter of the festival. The Brew Works demonstrated that in beer there is good times and charity. At the after party, if a festival goer left on their wristband, $1 was donated for each drink purchased. Nicely played, Brew Works.  During the festival, the Brew Works poured the Last Mango in D-Town, a 6.8% IPA, Midnight on Main, a 6.5% Cascadian Dark Ale (also known as a Black IPA), and Octoweisser, a 7.6% Hefeweizen.  Midnight on Main was gone by the time I got there. 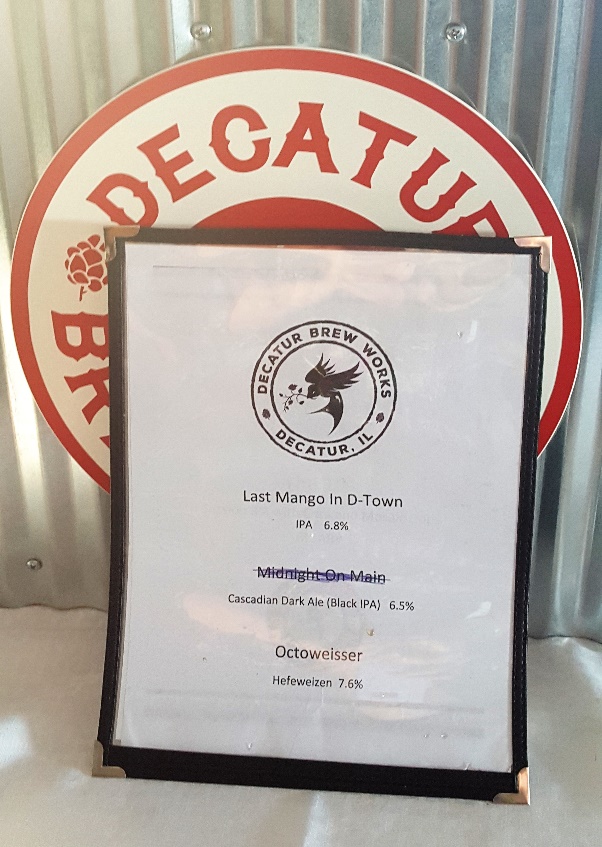 Our well-known local brewers brought us their best. Big Thorn Brewery (Georgetown) brought Scruit, a sage and cherry gruit (ABV: 5%, IBU: 0), a beer without any hops. Big Thorn hit this one right on the head. It was a sour, fizzy treat with a double entendre name. After you have a pint, you will want to say, “screw it” to your problems, as well. They also brought the Farm Pale with Citra, a pale ale made from Citra hops aged on charred oak logs from the woods on their farm (ABV: 5%, IBU: 35). As always, everything Big Thorn makes is naturally carbonated and made with solar power.

J.T. Walker’s brought Hail to the Chief, an IPA made with West Coast hops and 20% corn that create a pleasant sweetness. They also brought the Orange and Blue, an American wheat ale with citrus and blueberries that has been exceptionally popular this year. It seems I see it all over town. Cheers to JT Walker’s for having the nicest signage. 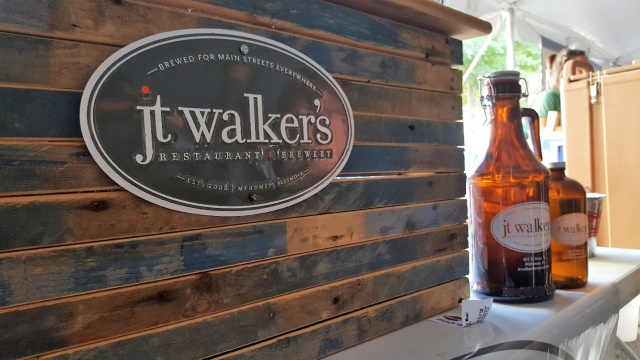 Speaking of busy this year, hasn’t Triptych been everywhere? It seems that I see them at every event in town. At this festival, they were pouring their popular Dank Meme, Really Dank Meme, and others from their signature cans.

In the meantime, Rigg’s has been busy in Decatur. Their beers can be found at five establishments, including the Decatur Brew Works. Riggs poured their Hefeweizen and Red Lager. The Red Lager is proclaimed to be made from dual citizenship, having a German Mother (made from dark German malt and Bavarian yeast) and an American Father (made from aroma hops). 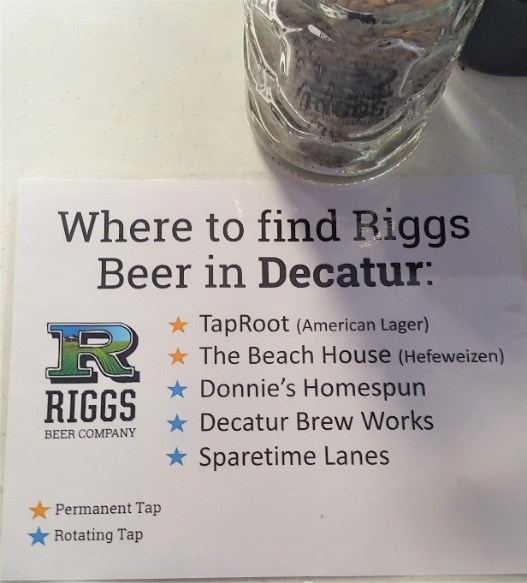